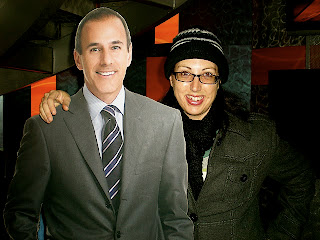 I miss Casey Anthony something fierce. I haven't seen Matt Lauer in over two months. I don't know if the hikers have been released. It's almost an election year and I could not come up with good material for an SNL skit if I were a writer for that, which I am not.

In short, I am one gigantic media mess.

Would someone, someone, please rescue me? Once upon a time, I used to read the Harvard Business Review. I read the Stratford Global Intelligence Report every day. I spent my weekends practicing Venn diagrams so I could sail through the GRE. And then something happened. I'm not sure what it was, but I think it had something to do with becoming increasingly boring. So I took up dancing again.

This weekend, I heard a story about an 85 year old woman who turned down a marriage proposal because the man didn't dance. Now that's a woman with priorities.

This weekend, my church turned 20. We sang happy birthday to our church. Literally. Right there in the service. Next year, we turn 21. How does a church celebrate its 21st? Tequila shots instead of communion wine? Someone should form a planning committee.

This weekend I ran 5 miles. On a Saturday night. Alone. I already put that on facebook but it's worth stating again because it was five miles. And I hate running. Which only proves that I will do that which I hate in order to avoid doing that which I hate more, which is going to parties. It's a little counter-intuitive because, well, it's a party. But trust me. Parties are simply a poor example of social engineering such that one is forced to have the same trivial conversation with numerous people. This causes me no end of exhaustion and depression because it seems that everyone has a better job than me because all I can say is "I work with computers"--which I don't--but that's what inevitably comes out.

In case you don't know, that's Matt Lauer in the picture. He's my celebrity crush. You can keep your Brad Pitt and Jonathan Taylor Thomas. Give me a man who knows his vocab words. And wears good shoes.

I'm reading an AMAZING book if you want something to occupy yourself :) It's called "half the sky" and is written by the AMAZING Nicholas Kristoff (columnist for the New York Times). It's about turning oppression into opportunity for women, worldwide. It's amazing and intelligent and inspiring all wrapped into one great book :)

Wait.....from the gal who has the most incredible technology and travels the world! Don't worry about the political scene, I have it covered. It is the Congress we better be worried about anyway. Love you!

You're someone with such an exciting life, and you feel like everyone else has a better job than you?!? Ridiculous! I love when you post your photos online of all the foreign locales you get to visit because of your job, and all the lives you impact as a result. You've lived a much more exciting life than most people, and you shouldn't be ashamed that you merely "work with computers" because in actuality, you do SO MUCH MORE than that phrase denotes.

Johnathan Taylor Thomas? JTT? That's who you think most people have a celebrity crush on these days? You really are behind...like circa 1996.