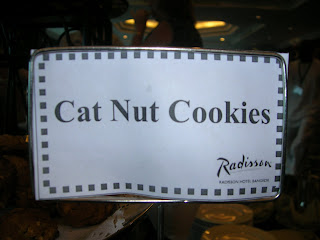 Email ThisBlogThis!Share to TwitterShare to FacebookShare to Pinterest
Labels: travel

Sigh. His name was Pornchi. Not that it matters.

And I had no idea how good cat nut cookies were.

Oh, and of course I learned the hard way that the 'ph' in Phuket is not pronounced as a 'f' like in 'physics'.

Give us a story about cat nut cookies. Some of us are clueless.

Have you been to Phuket?

Dang! I said as I dropped my Cat-Nut Cookie on the not so clean streets of Phuket. Mr. Pornchi had bumped me as I stepped away from the tuk-tuk driven by my favorite driver. I began to think that this was not going to be my day...

This blog used to be funny. Now it just has [stale, month-old] pictures.

so...ummm...is it safe to say that i shouldn't be checking your blog.