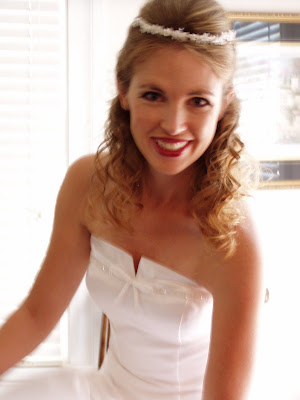 Today is my sister's birthday. In her honor, I will write a tribute of the things you probably do not know about Kristin......but should.

Sweet, Karin. I wish I knew her, too! She sure has an awesome sister.

I read your blog today! The email with an easy to click link really helped. Jim says your being nice to say that I write like Walt Disney. He says "You just write messyhankYhank you, Ka-Ka.
I'll tune in more often-especially if it's about me.
Ok. Been trying for five minutes and I'm aggravated now b/c I cant figure out how to post this comment. I need training!

So sweet, baby girl! You are every bit as beautiful as Kristin! It is EliZabeth but it was supposed to be EliSabeth as in the Bible but I was too drugged to catch it until they told me that it was too late. It is still EliSabeth to me and only EliZabeth on my will and other important financial documents. (Boo for the state!) I LOVE it when you write!

Kristin,
You probably don't remember me, but when I went to Master's, I wanted to be you. However, I thought your birthday was in October, not that that makes a difference. happy belated birthday!

Karin,
You were/are beautiful, even in our awkward middle school days when we became friends.
Ha! I just figured out that you and your sister used to have the same initials. That would be mighty convenient for monograms.